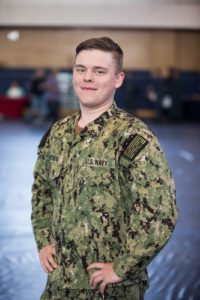 YOKOSUKA, Japan- An Irving, Texas, native and 2016 Nimitz High School is serving in the U.S. Navy aboard the aircraft carrier USS Ronald Reagan.
Airman Dylan Kitchens is an aviation boatswain’s mate (fueling) aboard the aboard the aircraft carrier operating out of Yokosuka, Japan.
A Navy aviation boatswain’s mate is responsible for operating, maintaining, and performing maintenance on aviation fueling and oil lubrication systems.
Kitchens is proud to serve in the Pacific and fondly recalls memories of Irving.
“I learned from my dad and high school coaches the importance of hard work and taking accountability for your actions,” said Kitchens.
Moments like that makes it worth serving around the world ready at all times to defend America’s interests. With more than 50 percent of the world’s shipping tonnage and a third of the world’s crude oil passing through the region, the United States has historic and enduring interests in this part of the world.  The Navy’s presence in Yokosuka is part of that long-standing commitment, explained Navy officials.
Named in honor of former President Ronald Reagan, the carrier is longer than three football fields, measuring nearly 1,100 feet.  The ship, a true floating city, weighs more than 100,000 tons and has a flight deck that is 252 feet wide.  Two nuclear reactors can push the ship through the water at more than 35 mph.
Powerful catapults slingshot the aircraft off the bow of the ship. The planes land aboard the carrier by snagging a steel cable with an arresting hook that protrudes from the rear of the aircraft.
“It feels good and I feel proud to serve on the Ronald Reagan,” said Kitchens. “Knowing we are out here being a part of the overall mission gives me a feeling of accomplishment.”
Kitchens is also proud of taking advantage of the volunteering opportunities that he has been given. He says helping people and volunteering in community relations projects is one of the highlights of being stationed on the Reagan.
Sailors’ jobs are highly varied aboard the carrier. Approximately 3,200 men and women make up the ship’s crew, which keeps all parts of the aircraft carrier running smoothly — this includes everything from washing dishes and preparing meals to handling weaponry and maintaining the nuclear reactors. Another 2,500 men and women form the air wing responsible for flying and maintaining more than 70 aircraft aboard the ship.
Ronald Reagan, like each of the Navy’s aircraft carriers, is designed for a 50-year service life. When the air wing is embarked, the ship carries more than 70 attack jets, helicopters and other aircraft, all of which take off from and land aboard the carrier at sea.
As a member of one of the U.S. Navy’s most relied-upon assets, Kitchens and other sailors know they are part of a legacy that will last beyond their lifetimes providing the Navy the nation needs.
“Serving in the Navy has made me more accountable and independent,” said Kitchens. “Also I’ve met people who I know I’ll be lifelong friends with and I’ll never lose touch with them.”
Seventh Fleet, which is celebrating its 75th year in 2018, spans more than 124 million square kilometers, stretching from the International Date Line to the India/Pakistan border; and from the Kuril Islands in the North to the Antarctic in the South. Seventh Fleet’s area of operation encompasses 36 maritime countries and 50 percent of the world’s population with between 50-70 U.S. ships and submarines, 140 aircraft, and approximately 20,000 Sailors in the 7th Fleet.